Where The Sheep Sleep

This is our route to where the sheep are.  I have just made a left turn at a break in the trees.  I have my zoom lens so the distance is deceiving, it’s longer in real life.  In the far distance you get an idea of all the bush on this piece of pasture and why we like it so much.  Some of our summer grazing pastures are open prairie spaces, pastures like this one are prime winter feeding areas. 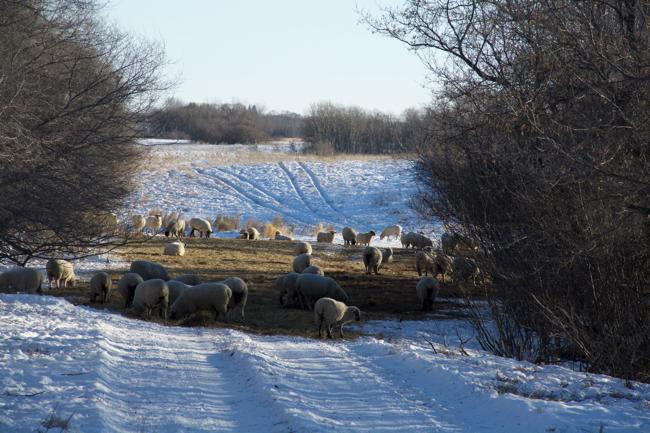 I travel along that trail and make a U-turn to come to the opposite side (the South facing side) where the sheep will bed down.  This spot is open to the South but with a nice hill slope that direction and a steep hill to the West.  If an ugly wind blows in from the South, we roll out feed right along the trail and the sheep still have protection. 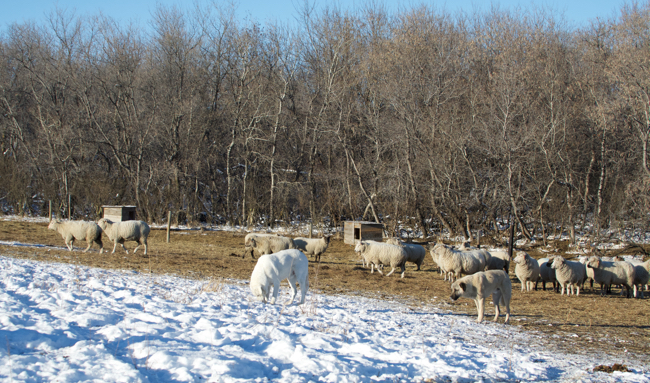 This spot offers shelter from North and West winter winds.  The bush tapers off at this close end and there is a small embankment which provides a surprising amount of protection for sheep who bed down on the lower ground.  On the North side is the trail (first photo) and then a row of shelter belt trees for added wind protection.

The dog houses are situated here, where the sheep like to bed down, and the bedding material inside of them is well packed and lacking sheep poop, indicating use by dogs and not by sheep.  The mineral tub is here and the water bowl is a short walk up the hill to the West and across a small paddock. 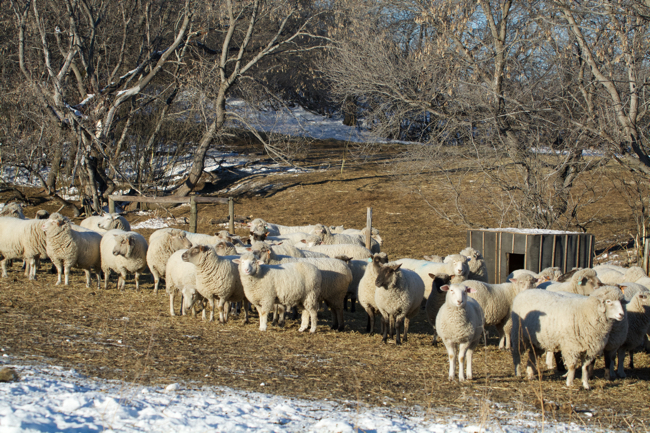 That’s not bare ground in the photo, it is a bedding pack on top of the snow.  If it turns really cold or after we have a fresh dump of snow, as we did yesterday, we put more old hay down to serve as bedding.  We feed a combination of old hay and new, and feed away from the bedding area, on clean ground.

The next photo was taken in the early winter, the sheep had started bedding in the tall grass, along the curve of the bush and I had just moved the dog houses out here.  The bush is long and deep, continuing well beyond the photo.  There is a small meadow in the interior and the rams like to hang out there in the summer time. 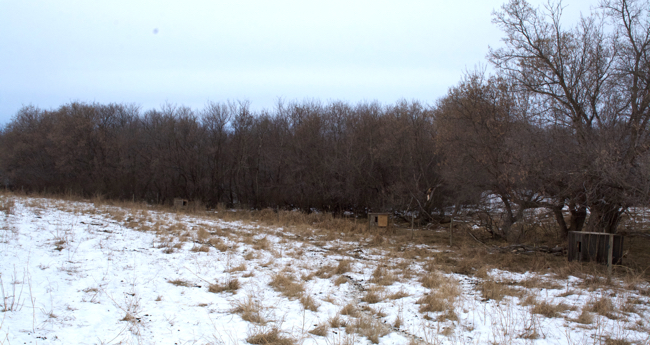 Each year we have a new winter shelter area depending on where the flock will be situated.  This is to prevent over use of an area since there will be a good amount of residue built up here by Spring which the grass may struggle to grow through.  That residue will, in due time, become top soil.