The Right Dog for The Fog

The day started in fog and ended the same way, dense and heavy.  Fog is such seemingly innocent weather and I’m taken aback when I find myself feeling unnerved by it. 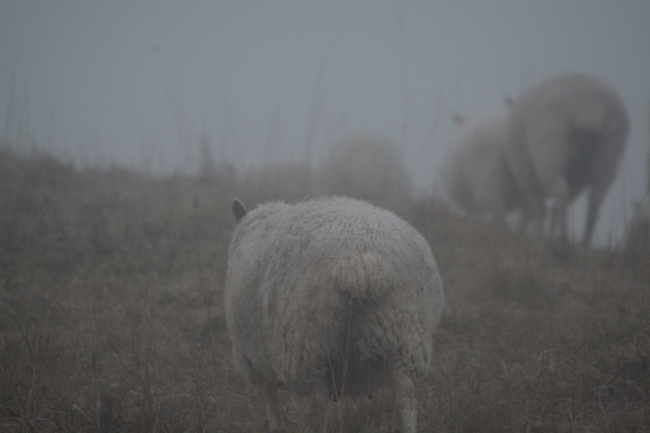 Tonight for doing the evening gather I want a particular dog along, I want my go-to-dog, Cajun. I also take BJ along with, mainly so she could do the task of gathering the rams and putting them away before we bring in the ewes. This job is a perfect one for her, although tonight she has to scan hard into the fog to see the sheep she is being sent for. A long, wide downhill outrun and up the slope on the far side to gather. The rams are always near the back fence line and every night they beeline to a corner where there are always a few ewes sweet talking on the other side of the fence. BJ handles this situation with aplomb. The rams boogie up the hill toward me, now having been convinced that with the dog here there is no alternative but to head to their night pen.

Out on pasture it is a different story. With the fog we can not see to the next hill over. As we drive through valleys and check hidden corners searching for sheep I am mentally noting landscape markers, such is the thickness of the fog. There’s that old bale pile, just passed the ewes favourite bush, okay I’m right where we parked the bus this summer, home is that way...

Perhaps fog unnerves the sheep too, or perhaps they thought they might be unfound and left out for the night, because for numerous nights in a row they have been directly south of the night pen area, very handy to bring in. But tonight they are further away.

I unclip the dogs from the Ranger, letting both of them go at once. Cajun cuts straight away to the left and crests a sharp embankment, disappearing over the hill into a parcel of native prairie. A moment later PJ shows up out of the fog, moving quickly with Cajun too hot on her heels. He does not like the llama, nor treat her so fairly, but he always collects her. BJ has also headed left but works tighter than Cajun and instantly has the ewes near her moving. I let her collect the back end of the flock and then turn to find Cajun who is still scanning the native prairie.

The ewes are quick to flock together, we leave them be for the moment and drive further to search a far corner for stragglers. I lose Cajun and BJ, ahead of me in the fog.  Finding no one, we catch up to the ewes and trot our flock home.