Guardian of The Day

By 8 AM the ewes are grazing their way to the shade which means the days are hot.  The guardian dogs regularly cool themselves off by wading into the sloughs.  I couldn’t find Oakley yesterday morning.  In the evening I could hear his constant, higher pitched bark which he does when he’s away from the sheep and can’t get back in.  Given that he was sounding a call, he was easy to locate, and he was on the wrong side of the woven wire fence - with a lamb.   There was no gate close by and lifting him over a four foot fence was not going to be doable by me alone.  Besides that I had to catch a lamb in the open which wasn’t likely to happen either.

I went home and picked up Cajun, then drove all the way around to pick up Oakley who was eager to hop in the truck.  The lamb was staying right with him and almost followed him right to my feet however I was next to the truck and Cajun was there.  The smart lamb had second thoughts and bolted.  Cajun was more than willing to oblige and catch the little gaffer who wasn’t so little when I had to carry him back to the truck.

Thank goodness that lamb stayed with Oakley.  The pasture they were in is thick with tall grass and I never would have noticed a lamb out there especially since I had no reason to expect one to be there.  Lily was out the day before this but put herself back in.  I think the dogs and lamb were slipping through a gate that doesn’t close tight to the brace post.  This morning I headed out with an extra piece of lumber to fill the gap so all should be secure again. 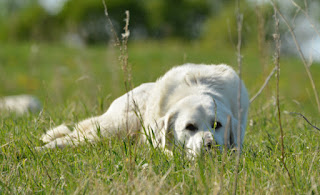