What Do They Know About It?

I almost forgot that I wanted to share these photos before lambing season was well and gone.  It’s a bit of a touchy topic to write about so it took me some time and edits to do so.

I see a side of sheep that is not often, nor properly, presented to the public.  I believe sharing these snippets is part of telling our agricultural story.  The picture on the billboards of the girl holding the cute white lamb is just a fraction of the story and a rose-coloured-glasses version at that.

Lily drew my attention to this ewe and lamb when I saw the ewe chase her off.  Lily tried to retaliate and rushed the ewe but I intervened. 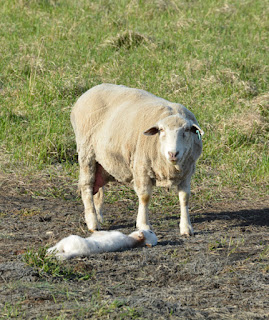 This ewes lamb is dead, he died a natural death at birth or just shortly after.  Her too large teat on one side of the udder might be why.  While my practical brain tells me I need to pick up the dead body, my innate brain tells me that this ewe needs to be ready to leave the body first.

In this case the practical brain won out and I picked up the lamb.  The ewe became frantic, running around and hollering, even circling the Ranger, where the body was placed.  Didn’t she understand the lamb was dead?  Lily seemed to know that it was and wanted the prize.  I couldn’t drive away from the ewe.  I returned the body to the same spot and watched her.  She immediately returns to the body and sniffs it. 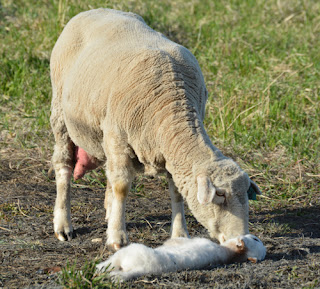 She tries to leave and calls the lamb to follow.  She does this numerous times and always comes back to the body.  She paces.  Her baa gets weaker and weaker.  I get tired of watching and consider taking the lamb away again.   Instead, I leave it there with her and decide to come back later. 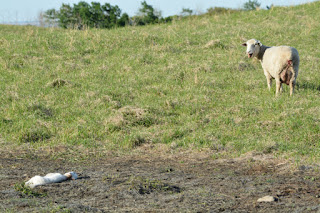 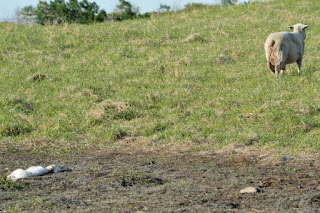 Within this natural style of farming I can do what I feel is within my means to respect the ewe and her sense of loss.  By doing so I honour my own relationship with the abundant life that is still going on all around me, and my relationship with the loss of life too.  This is one of many scenarios that cause me to love this natural style of farming, and why I think these parts of the story need to be told as much as the glossy ones do.