I have been watching these foxes for a couple weeks, checking to see if the kits are outside of the den when I pass by and hoping to get a photo.  Their home base is situated in the midst of the pasture where the sheep are grazing now.  The other day Allen and I watched through the binoculars as the pups played.  We wondered when the guardian dogs would spot them but they did not on that day.

During lambing we found three dead lambs that were partially eaten and wonder if it was the foxes.  Fox are not large animals and I imagine it is only very young lambs they are able to catch.  They would have trouble carrying any larger lamb away.   I also imagine any lamb they caught was likely an ill-thrift one to begin with, not a spry, fit one.

Whiskey spied the fox a couple nights ago and we watched from a distance as he put the run on them.  The kits disappeared into the den, and the adults high tailed it across the pasture.  We know the guardian dogs are capable of killing the fox and while Allen is on side with the dogs, I feel torn about it.  Even though they may have stolen a lamb or two I don’t feel a threat from the foxes and this natural situation is one of many that are taking place on the pasture.  At the end of the day, somehow I am comforted by the knowledge that wildlife is here, in coexistence, or at least semi- coexistence, with ourselves.

I will not deter the guardian dogs from doing their rightful and expected duty but each time I pass by I hope the foxes are there and that I get another glimpse of them. 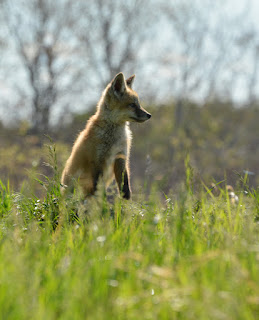