Skip to main content
Labels
Posted by Unknown May 11, 2015

A stretch of easy days with time to be in the art studio and work stock dogs melds into busy days with the arrival of the first lambs.  I always feel mild unease with the first lambs, I guess even after a decade of lambing, I'm never fully sure I'm ready enough for it.

The first ewe to lamb, births in a sheltered spot, tucked over a hill, a curve of trees and brush at her back.  It’s tougher for us to spot lambs in this terrain but that’s precisely her point.  This is a two year old ewe, very possibly with her first lamb ever, so she’s picked up some good skills somewhere along the way. 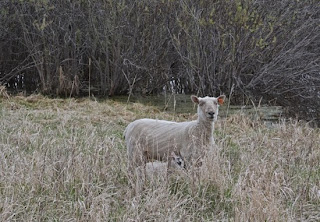 By finding such a sheltered spot to birth she is also away from the flock.  We pick up guardian dogs and take them back to her.  Oakley first and then Whiskey.  The dogs may or may not stay right with the ewe but it’s so much more comforting to know that they know she’s there with a little one.  They will remember.

His nose has already told him what he needs to know so Whiskey takes care of the first order of business before softly investigating. 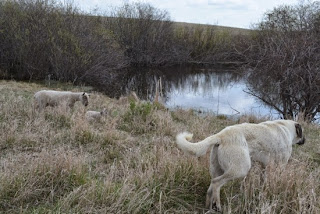 This second photo is deceiving since the shot is from behind the ewe.  I’m a short distance away so I don’t spook her off and there is more distance between her and Whiskey than it looks. 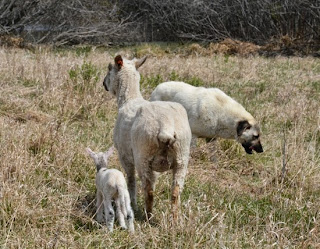 He can’t get too close to her either or she gets upset.  He shows some soft language and the tongue lick is deliberate.   He’s not here to harm anyone is basically what he’s saying.  I love watching these guys; both the sheep and the dogs are absolutely amazing creatures.