The other day I toted the camera with me when we went out to do some fencing work. Since my recent coyote encounter, I was really hoping to catch some wildlife but keeping a camera with a large lens at your side while one is busy fencing doesn’t work well. I know which activity I’d rather be doing but photographing greatly delays getting any fencing done. 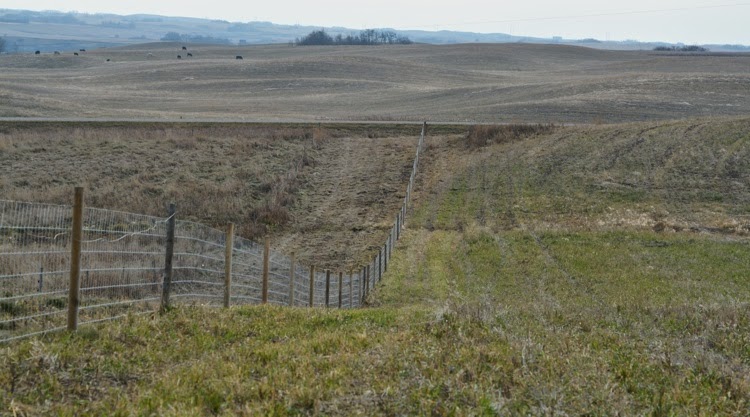 The coyote encounter was a couple weeks ago, right in the area this photo was taken but prior to the new fence being there. I was working along the fence line, the stock dogs along for a run while I walked, feeding out a strand of high tensile wire to be used as a guide line for pounding the fence posts. I had a tangle in the wire and was working with my head down, vaguely aware that the stock dogs were milling about to the left of me.

The movement of an animal came into my peripheral vision on the right side and brought my head up. It was a coyote trotting along and peering at us as though he was wanting to see what we were doing. He was only fifty or sixty feet away.

Almost in the same moment my head came up and I registered what I was looking at, the stock dogs spied the coyote. I gave a holler to call them in just as they bolted forward. The coyote was already running flat out. Dang it.

Oh how I longed to stand there a moment longer and see that coyote. Just to stand still with one for a moment and really see it. It gave me chills to realize how unaware I was of his approach but then he is the wild animal, he survives because he’s a bit stealthy. I don’t practice those skills.

I’m longing for a moment with a wild canine and at the same time putting up a fence to keep the ewes in but also to keep wild canines out. Such a juxtaposition of life is playing out in my backyard; in my choices. I suppose that fence is my way of coexistence, as are the guardian dogs. At least, it makes me feel better to view it that way.