When you add a dog to a group there will be adjustments for the pack. It is the same when dogs leave a group.  About ten days after the loss of Glory and Willow the first hiccups with the livestock guardian dogs arose.

Being without his partner, Zeus had to adjust to working solo for the first time in his young years. And the loss of Glory left three males and Lady in the main pack.

The livestock guardian dogs live with the sheep, away from the yard, and that means they are on their own time more than I am there to supervise their life. Yet the results of a dog fight can net you some clues about what might have happened. I’ve also developed a pretty good sixth sense when it comes to knowing something is amiss and then watching the dogs to see what it might be.

Knowing the dogs as I do, I know when they are out of sorts. The usual greeting isn’t so usual and yet there is nothing outlandish that makes it so. It’s just the way a dog approaches, or that one did and the other didn’t. Or the subtle tension in posture that wasn’t there the day before.

In this case it was obvious there had been a fight and Oak was on the rough end of it. A single fight is seldom reason to make more upheaval for the pack but it certainly means heads up. A second fight two days later and some serious posturing between the males indicated they were not over what they started. Oakley was once again on the rough end and I wasn’t willing to risk him to a third fight. I took Oakley out and moved him up to the building where he spent a few days recovering on a wool pile with a heat light above. I think he thought he was in heaven. He rested deeply. As Oak recovered he spent his days with Zeus  - and he’s still there. 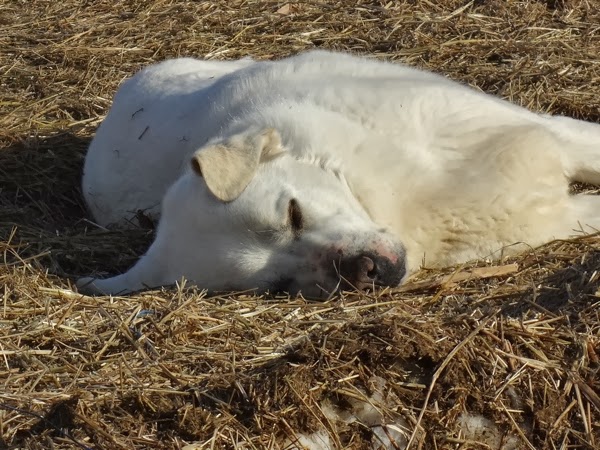