Moving Sheep Here and There

For a little over six weeks the flock has been rotationally grazing on three 80 acre-parcels adjacent to each other. The grass has held up well and I might have gotten away with another rotation. Instead I opted to put the ewes on a piece of pasture that has a large chunk of native prairie that is best grazed now rather than later.

Because there are cows with calves I didn’t use a stock dog to do that part of the move. I did it with the Ranger. Jayde and Cajun have worked cows on occasion but just aren’t experienced on cows or patiently strong enough to work a cow with a calf at her side. I’ve learned that lesson. 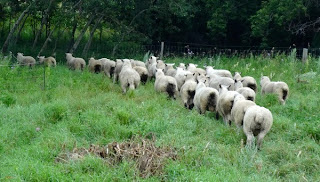 Moving rams and doing a quick count to make sure I found everyone. The cows and horses are ahead of the group. These guys will go to a paddock on the opposite side of the farm from the ewes, to put as much distance between the groups as I can.


Next, the round up of the ewe and lamb flock. This time there were dogs involved for sure; Fynn, Jayde and Cajun were along to help. This part didn’t take long at all, even passing them through the small working paddocks and navigating four gates, went quickly.  The ewes wanted to get to new grass and were very willing to move this morning. It helped that the morning was foggy and cool.

This was the scene later in the evening. Isn’t this a lovely place for sheep? 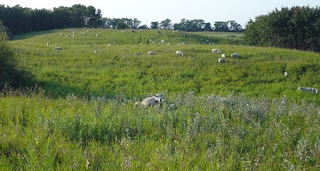 This paddock is rugged and beautiful with sharp hills, lots of brush and, at the moment, patches of sunny Brown Eyed Susan’s 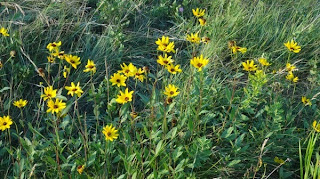 I hope the sheep don’t eat these. 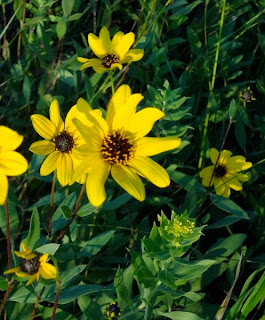