LGD's Set Up for Duty

When we arrive on pasture each day, the livestock guardian dogs are not always near the sheep, especially if the weather is warmer and they don’t have to sleep within the flock to stay comfortable. It is a marvel to note where they are stationed and upon arriving to meet each of them there, realize why they might have set themselves where they have.

If we always draw our conclusions from our physical view near the flock, or if it is assumed a dog always has to be with the sheep to guard them, we’ll never realize the fascinating ways of guardian dogs and how they work.

To help create a visual of this take any small object and set it on the desk in front of you. That object represents the flock, which are bedded down in their brush shelter.

Lady and Diesel are together, sleeping on some hay just outside the sheep shelter, on the North side of it. From their position they have an open view to the East. To the West they can see to the top of a nearby hill but not beyond it. They would notice any creatures approach on the hilltop. To the South is the bush the flock is resting in. They cannot see directly South but are close enough to react quickly to any disturbance there.

Way over to the East of the flock, up on a far hilltop, and sleeping on top of a bale, is Whiskey. From his perch he has a broad view of the much of the pasture. He can see all directions and the flock is below him, to the West.

To the South of Whiskey’s location (so South East of the flock (your object)), Oakley and Glory are curled up together, also on a hilltop. From their vantage point they can see the South-East corner of the paddock behind them which drops off behind the hill they are on. They have a clear view to the West.  This means they also have a clear view of the South side of the bush where the flock is bedded down. The side that Diesel and Lady do not have a clear view on.

You might wonder why the dogs are not in physical positions that surround the flock but they very seldom seem to do that. And from physically putting myself into each position of the dogs one can see that they don’t need to.

I also think the dogs set themselves to the side they feel the greatest threat from. So in the case above I would bet that the threats (if any) are coming from the East - South East side of that paddock on that night/day. As the predators shift, so will the dogs. Keep in mind predators do not necessarily mean coyotes who would hunt the sheep but to the LGD’s mean anything trespassing the paddock. Here on the SK prairie that could be deer, the occasional moose, coyote, fox, ravens and as spring approaches, crows.

Willow and company, (the second group of LGD’s), are in a much smaller paddock so the dynamics of their set up is less acute, but nonetheless still there. Even though there is not always a lot of action, these dogs are truly fascinating to watch. I will have to catch some video of them someday. 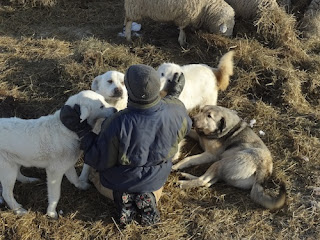 The dogs have wandered over or followed the sheep to feed, and receive some appreciative attention from Allen (Whiskey is not in the photo).
Labels: livestock guardian dogs