A Little Piece of Winter Work

With the extended cold weather I was growing more and more nervous about the ewe flock on pasture having to rely on snow for water. We decided to leave gates open so they can come and go to the water bowl near the yard. They have to walk to get to it but that’s alright, the exercise is good for them.

For three of four days we will lead them to the water bowl and allow them to walk back to pasture on their own to show them they can come up for water and get back to feed.

Allen and Cajun did the work yesterday, and today was my turn. The sun was shining and I managed a few good photos along the way, which is rare when I’m preoccupied with moving the flock with a dog.

Cajun has gathered and turned the mob my direction and we’re heading off.  Lady is in front, leading as she often is. The black blob on the right is Cajun heading to check the back and far side of the mob again. 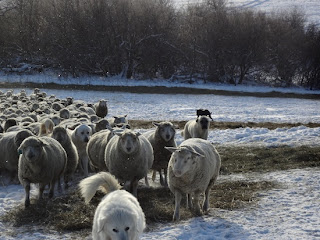 Coming through the first gate. I have been trying to get a good Where’s Waldo photo for some time: This one is pretty decent. In this case it’s Oakley. 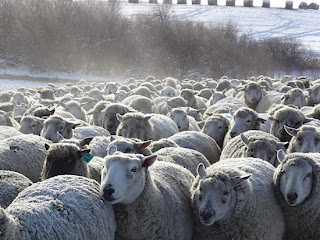 I’m usually walking at the front of the flock but have fallen to the back because I kept stopping to take photos. 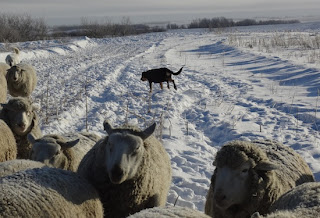 The flock heads over the hill and to the water bowl. As they pick up speed and get further ahead Cajun heads to the front but gets called back. We leave the ewes here to drink and make their own way back when they're ready. Today it was soon after we walked away. 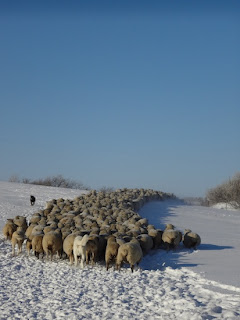