When we made the last move with the flock Gibson came along for a work debut. 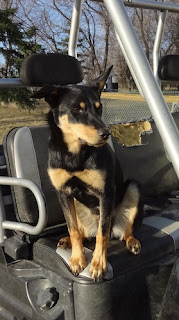 Gibson is a young 15 month old Kelpie. He is related to Cajun and shows a lot of work similarities but does not have quite the same forceful gusto Cajun started out with. Gibson is  more thoughtful.

I wanted to give Gibb the experience of larger flock work but know he isn’t capable of long, extended gathers. So Jayde did the gathering. She was really out of sorts however, and kept missing sheep. While the ewes are real tough to see in the brown and snow landscape I was pretty sure it wasn’t just that. It was a real mishmash of a gather but we stayed in good spirits and got it done.

While she and I were doing that, Allen was on the Ranger checking the far corners. Gibson rode with him. Along the way we met somewhere close to the middle, and when we had the entire flock in a mob with no outliers, I unleashed Gibb from the Ranger. I was half way along the side of the mob and sent him from there, around to the back of the group. No fancy flanks, just a cue to get around and bring me sheep, which he knows. As soon as he left I headed for the front of the mob again.

For a dog who hasn’t seen that many sheep, even half way around is a long way around. The dog keeps seeing more and more sheep and very quickly loses sight of the handler. It’s confusing for them. Gibb got part way around and then came back to where I sent him, looking for me, and/or for direction. When he saw I was indeed still present he went back to work on his own. Then he went waaaay around and beat me to the front of the flock who were just stretching out onto a trail. He got there just before me, and turned the lead animals back. I quietly sent him back the way he came. Jayde meanwhile is still bringing the mob along at the back.

We’re now on a trail and it’s only a short downhill stretch to the gate. Gibb works with Jayde at the back of the flock for spell and lickedy-split we’re there. The ewes stopped up at the gate since we were asking them to take a new route and pass under the fence wire. In this case, I didn’t want Gibb to keep working when the sheep weren’t willing to go. There’s a time and place for that set up and with so many sheep here, this wasn’t it, so I had him stand and we just waited for a bit. Once the flock started forward motion again I let him work again which allowed him success of moving the flock through the gate.

This little bit of work was great for Gibb. Just long enough for him to get a feel for a large group of sheep but not too long to wear him out, plus a main dog there providing the real push. Somedays I don’t feel I have a clue about what I’m doing with the dogs, and some days it all just works so slick. For Gibson’s sake I’m glad this was a day that it worked so slick.