Walking in after chores tonight I noticed the Kelpies had a new toy. 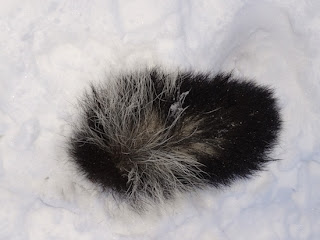 At first discovery of what it was I was a tad put off and scooped up the tail to discard it.  Then I thought, heck, I’d pay $12 bucks for a fake one from a pet store. Here is one naturally provided.

It’s just the tail, clean and no flesh attached. And I very quickly noted that it had very little scent to it. I left it for the dogs.

So how did they come across a skunks tail and where is the rest of it?

Thankfully, the Kelpies didn’t encounter the skunk the tail came from. A fox did.

About a week ago I noted the strong stink of skunk lingering around the Quonset. Around the corner, near the burning barrel there was telltale signs that a scuffle had taken place in the snow. There was washed out blood smears (which the Kelpies rolled in) but no carcass or pieces of it. There were tracks and drag marks up to the entrance of a foxes den, under the shop.

We have a resident fox who has made her home base underneath our red shop. She comes and goes with the seasons and has even raised a litter here. She doesn’t bother us or the sheep although she drives the stock dogs nuts. Every day they make a ritual lap or two around the shop. She gets chased by them on occasion and I swear has turned this into a game.  The one thing she is a threat to, is the cats, but she is also a deft little rodent hunter herself, so I suppose it balances out. Besides, there are enough rodents here to feed her and two half-time hunting cats.

These photos were taken two years ago. It’s the pups of that year. I don’t know if todays fox is the same female or not but I like to think it is, and somehow I enjoy coexisting with her. We don’t feed her or make attempts to interact. We just observe her. She’s on her own, free to stay or to go. 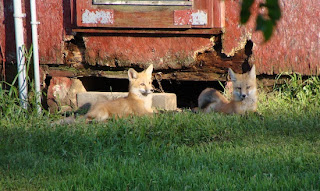