Since we move our flock often, for grazing purposes, and move them with the use of stock dogs, the flock is very familiar with both. To the ewes moving equals new grass - this results in a flock that readily moves.

It didn’t start out this way though. Our first few moves were rough to say the least. I’m impressed that the stock dogs survived the chaos and the pressure. Yet it is because of the stock dogs that moving the flock was and still is doable.

Now that our flock is familiar with moving we have options in the way we move them.

My favorite way to move the flock, especially when I’m by myself, is to use a stock dog to gather wayward sets of sheep from the far side of hills and various hidden spots first. Then once the whole flock is loosely gathered, head off in the desired direction. I like doing it this way because everyone travels together. Going through gates is simplified because the dog is keeping the rear of the group caught up, which helps ensure the whole group passes through.

The other way of moving the flock was discovered through habit of moving them. Because we use the water bus and it moves with the flock, the sheep learned to follow it, thus we can use that to our advantage when moving. This way is how I moved the flock this afternoon.

The water bus was empty this morning and since I wanted to move the flock in the afternoon I left it empty, that way I could fill it and take it directly to the new location. When I returned and set about filling the bus some interested onlookers were gathering around.

Once full and on my way to the new paddock it only took a couple of calls to convince some lead ewes to follow.

When moving the sheep by letting them follow along the flock stretches out into a long stream of animals. In our terrain there are often animals in the far corners and out of sight who do not notice the flock is going anywhere so we still have to collect pockets of sheep. Also because the group isn’t together we end up with animals who see their flock mates up ahead and run down the fence line before traveling through the gate first. Just as these lambs did.

After moving the lambs we came across a group of twelve or so who were part way along the route and brought them to the gate. And after that, our third task was collecting this entire group who were grazing, out of sight, in the furthest corner. 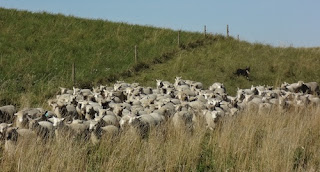 When it comes right down to it, both ways of moving the flock involves work for a stock dog, so I’m quite satisfied with either one.
Labels: kelpies raising sheep stock dogs