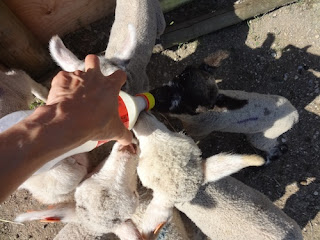 Every year we end up with a handful of bottle lambs and every year I curse them.

When lambing wraps up we are still left with the task of taking care of lambs for a few more weeks. They need to be fed at least a few times a day, so we can’t go too far. Just when I’m looking forward to the freedom to leave if I like I’m still tied to the place because of a few bottle babies. They don’t grow well and don’t thrive, at least mine don’t, but then I’m not putting top care into them either. This years bottle lambs are weaned off of milk now but when weaned off of milk they go downhill a bit before picking up again. So I’m left wondering if it was worth it.

Then there is this little problem. Bottle lambs lose their sheepiness. They don’t act like sheep. They do not know to flock. They do not care about dogs. I’m sure they’d walk right into a coyote’s mouth. This little fellow is a case in point. 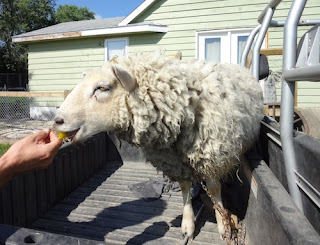 This is Baby Bunting. A bottle lamb from 2011. He is stationed with the rams who were in the barn paddock until we started building there and removed part of the perimeter fence temporarily. Then the ram group was moved out to a large piece of pasture. When in the barn paddock Baby was secure and because the area was smaller, he was always nearby the rams. Once in a larger area, he wandered off on his own. He slipped through the fence and we found him 1/2 mile South on another paddock. All on his own, not a real care in the world. Perfect coyote pickings.

So we retrieved him and set him with the yearling ewes that I use for dog training. Here he makes a nuisance of himself because he won’t come along with the other sheep. And I don’t want him to when I get sheep for lessons. But it can confuse the heck out of the stock dogs as they don’t believe he should be left behind. Yet he doesn't respond like any other sheep.

Baby Bunting is sweet and quite the character but still a pain to keep as will this years lambs be. If we keep this up we’ll soon have a small flock of bottle raised sheep to sell.
Labels: lambing raising sheep