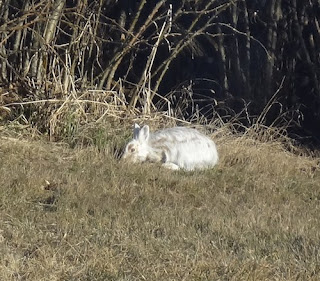 One of the wild rabbits was up behind the house early this morning. 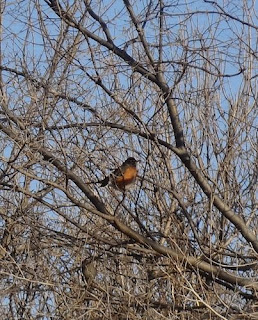 Several Robins were in the trees just above. 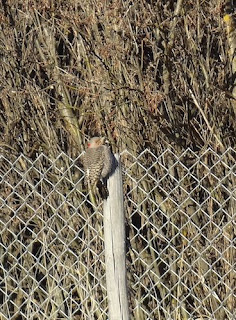 A flicker sat on a fence post of the dog yard. In the sky a V of Canada Geese flew over, momentarily silent. Sandhill cranes have returned to the fields.

The crows have been cawing at us for a couple of weeks already. There are more of them hanging around this year. This week we have also been hearing the trills of a few familiar summer songbirds that I do not know the name of. 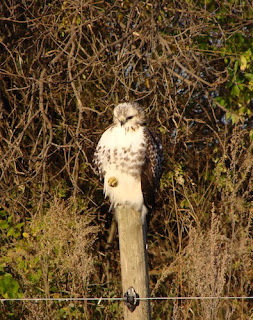 We see hawks like this guy, all the time and more rarely, owls. Bald eagles have been spotted although I have not seen one yet. 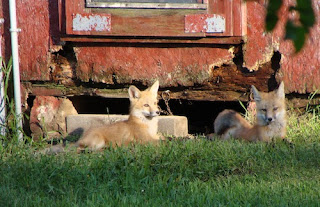 And a fox raised a litter of kits under our small shop for three years in a row. We frequently watched her play what appeared to be a wily game of catch-me-if-you-can with Cajun. She did not like it if he snooped around the shop where her very young pups were hidden. She would get his attention and then take off with him in pursuit, but never able to get near her. When the pups grew up, they’d all move on. She is not back this year. 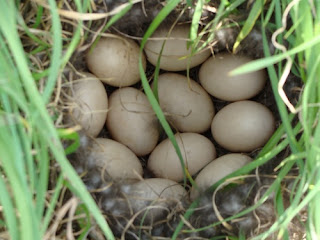 If we’re lucky we find ducks eggs in the pasture grass and during mosquito season, dragonflies, like this beauty, are plentiful. Deer are commonplace and shed moose antlers are a sign of larger grazers passing through. 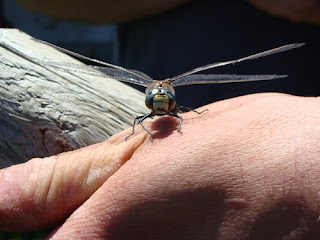 When this place was being crop farmed I didn’t notice half of this wildlife, which I think can be attributed to two reasons. Our farming mindset at that time did not allow for their existence therefore I never took a long look around and because chemical driven crop farms all too quickly become uninhabitable ecosystems for natural creatures.

Today, this place is rich with life - and I take notice of it. I like to think that all of these creatures are here because now there is natural energy, food, habitat and aside from natural predators and stock dogs who occasionally try to run them off, there is mainly peace for them here.

This is the wild side of country life that I see as a regular course of living as a grass farmer. Yet the astounding thing is not just to see it, but to know that all of this wild life is living alongside of me, observing me more closely than I do them.

There is no profit behind rabbits, songbirds and dragonflies but paper dollars are not part of the equation in the natural world. Maybe it would do farmers some good to occasionally leave money out of the equation too.
Labels: Musings