All guardians were home with the flock this morning; all were eager to eat breakfast.

Whiskey was bearing evidence that he met with a prickly situation sometime in his travels since yesterday morning. He had a mitt full of porcupine quills in his muzzle. Several were broke off from him pawing at his face to rid himself of them.

He lay down and let Allen and I pull several of the quills out but grew more and more unwilling and agitated as we progressed.  Even though we try to be very calm and cool with the dogs, the muzzle is a highly sensitive area and I imagine it hurts to pull each quill. Whiskey is an aloof dog who tolerates handling but never fully accepts it and I watch for and heed his warnings when I’m handling him. 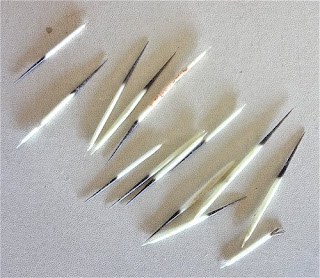 When I pulled a quill from the particularly sensitive spot on the front, upper lip, I felt his teeth graze my second hand, which was resting on his flank. His move was so fast I wasn’t even able to follow him with my eyes. When he gave me the next hard eyed look I knew that was enough. The first bite was a warning, the next bite would not be so gentle.

We opted to take him to the vet to remove the rest of the quills. There he can be sedated for removal of the quills and get those short broken ones out too plus any on the inside of the mouth. A trip to the vet is certainly a stressful experience for a guardian dog who lives in such a rural, prairie space but leaving him with quills isn’t a great option either. Thankfully we’re able to leash him, although it has become apparent that I didn’t do enough leash walking with him as a pup. He freezes at the tautness of a leash. We loaded him into the truck without much trouble though and Allen took him to town.

Interestingly, so far, it has been each of our three male dogs who have ended up with porcupine quills at some time or another. Oakley has had them twice and Diesel once. None of the females have tangled with porcupines. Whiskey is the first dog we’ve taken to the vets for removal of quills. I was able to pull quills from Oakley myself; he is such a trusting soul that boy. Diesel was more of a battle but he did allow us to finish. It takes a lot of time and sometimes you need to walk away and come back, but if you don’t fight the dog and if you let them settle between pulling quills, some will let you continue. Whiskey isn't one of those kind.
Labels: livestock guardian dogs