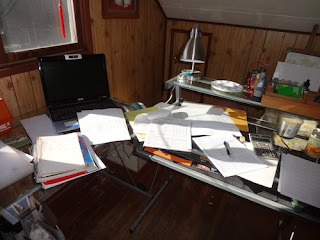 Since recently doing business numbers for tax purposes I was spurred on to figure out our cost of production (what it costs to raise one animal). Doing this each six months would be ideal but I seem to only manage getting it done once a year.

I like to know COP out of curiosity and because it helps me figure out where I’m spending too much which is something I tend to overlook until I do the numbers. I can see areas to try to cut costs on (which is something I can control). If I know what it costs to raise one ewe I know what my break even market price is. If market prices head that low, I can be prepared to get out before I take a loss.

Besides, the way I figure it, if I'm not staying on top of what it costs me to raise sheep I can hardly complain about the consumer not paying enough to make me a living. After all, we are both part of the food equation.

So what goes into my cost of production figuring?

That said, there are always some expenses that are hard to peg down and then I get to decide where to put them. Like medicines and vet supplies. These are not always given to every animal but I include them and calculate them as a cost per head. Any expenses that don’t fit into the direct cost category are fixed and I put these into the overhead category which shows up later in my financial figuring. So you can see there is leeway and preferences when doing economics but as long as your expenses are being placed somewhere it will work itself out in the end.

So in my COP figuring are the following:

Yes, I charge the ewes for grazing grass. They are eating on the land and the land needs to be paid for. Also, in case you're wondering, I put guardian dogs costs into my overheads category.

In 2011 the cost of production was low, which I’m glad to see since I’m aiming for low input, grass farming. Two things helped it out. We didn’t pay for shearing in 2011 because we hosted shearing school. Shearing adds $4-$5 per head. We don’t worm the whole flock, only who needs it so that expense is minimal. Also my cost for making our own hay is probably low but we have a good arrangement that makes it that way. If I do the figuring with purchasing hay my COP rises by $12 per head.

Economics can be done in many ways and I used to fret that my numbers never matched the other guys. Now I realize the main point when doing numbers is to settle on a way that works for me and use that method each year. Then I have a benchmark from year to year. So it isn’t about what the other guys numbers are, it about using your own numbers as the valuable tool they are.