Liezel at Pilgrim Farms recently emailed with questions about guardian dogs. She wanted some feedback about starting with one dog or two.  Should they be same sex or opposite? Would two dogs fend off boredom in her smaller scale set up? If she gets a pup should it come during lambing or after?

Because the livestock area at Liezel’s place is smaller my first thought was beefing up the fencing to make it more predator proof.  It’s always worth considering as sometimes it may be more feasible (cost and time wise) to predator proof the fence than get dogs as dogs are not cheap to keep.  Although if future plans involve expanding your paddocks then a dog might still be best option long term.

[As it turned out Liezel has a pretty solid fence in place already which is an added bonus when getting new dogs].

On the dog questions:
I am always in favour of having two dogs (or a pack). Many people get hung up on two dogs being twice the trouble and it may seem that they are at times. But my own experience is that two dogs can help alleviate some of the troubles seen with having only one. And training/monitoring is still required whether you have one or two.

With more than one dog, each dog gives the other backup which will give them confidence when facing predators. One dog alone against coyotes or larger predators is - well -  alone, and all too often outnumbered and outdone.

If getting two dogs, and they are your first guardian dogs I would advise against getting two females. More so if you plan to keep them intact. Adult females are more difficult to pair up and they fight more often and more seriously. Males have spats and go back to work. Note, I’m speaking in very general terms here, every animal will bring its own ideas. It isn’t that two females or two males can’t be run together, but it is a challenging way to start with LGD’s, doubly so if one isn’t experienced with raising multiple dogs.

Best combo seems to be male/female pair but then you need to desex one or manage female heat cycles if you don't wish to have pups. Next best, two males.
If you favour a pair of the same sex and have the experience for it, consider getting an older dog and a younger one, rather than two of similar age. Another option is an adult now and a puppy later.

Having said all that, be sure you feel comfortable with the choice. And consider your area and the workload. Just because two dogs is one recommendation, don't tackle it if you don't feel you want to. Or if you find a great adult who loves to work solo, then one dog may be all you need. 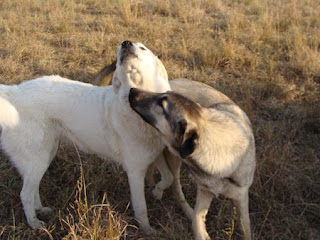 As important as one dog or two is where the dog(s) come from, especially when getting older pups or adults. A dog who is accustomed to working with other dogs may struggle when asked to work solo. A dog who is used to working solo may struggle with allowing another dog in (although most adults will accept a puppy).
A dog who worked a small holding which included a yard and people may struggle when left alone in an area without frequent company and contact. People often assume that since the dog is guarding the livestock, who also live around the yard, that it is bonded to the stock, but often the dog is bonded to and guarding the place, in which the livestock are included. So in fact the dog isn't bonded to the stock, and when put into a situation of stock only (like on a range) the dog ends up back at the yard.

Our image of guardian dogs is often one of a dog sitting or laying, noble and on watch. But this is only what they do part of the time. These are active dogs and two of them won't necessarily fend off each others boredom forever (although it can help and I'm not saying its a bad move). But boredom comes from not enough area/work/stimulation/exercise so bear in mind that if two dogs are bored then you will have twice the trouble. Because your animal area is small you will need to consider the exercise needs of the dog. Is the area to be guarded large enough for the dog to feel satisfied with patrolling and guarding? Or is the space small enough that a dog may end up feeling too confined without extra stimulation and exercise? Sometimes in a small enough area, the mere presence of the dog will deter predators, thus, the dog doesn't have to work as hard.  Predator pressure also comes into play here.

There are several options, including the llama. Or taking a dog on loan which would help you out in the immediate term and give you a chance to try the guardian dog route.

On getting a pup:
I don't place pups with animals who are birthing or who have very young babes at their side. Not because the pup will be too rambunctious, young puppies are not, but because the moms can be very defensive. A curious pup walking over for a sniff, is apt to get a head butt and sent flying. Young pups are not physically capable of moving out of the way quickly enough either. A few of those experiences can deter a pup quickly or cause him to act aggressively to ewes later on.

If you have a group of animals not birthing or who do not have young at their side that can be kept seperate from others who are, then you can raise a pup with them. Consider how busy you are at birthing time too. Do you want the extra work of having a pup around then? Although, because you’re around often and can check on and supervise a pup, this can work in your favour too. If you can't keep a group of livestock seperate, I'd be inclined to get the pup later on when everyone is older.

And finally, everybody has different ideas and philosophies for making it work (this is only my two cents worth), so ask around and see what others do/have done.