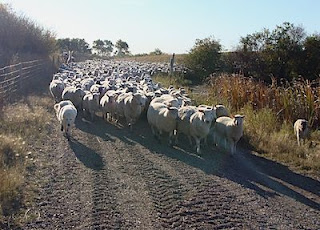 Cajun and Jayde and I brought the flock in from pasture in order to sort sale lambs. We brought the flock through the yard paddocks and filed them into the barn with relative ease for packing seven hundred animals into a barn. We even started them through the race for sorting with little trouble.


And then the day slowly dissolved from there.

We discovered a ram was in with the ewes. I’ll leave it to your imagination to guess what string of curses we conjured up at the sight of him in there. They were very silent, deadly ones. That ram is lucky he still has nuts.

Then we had one of our worst times working the flock yet. There were all sorts of not-right pieces that led to this conundrum of a day and my brain has been uselessly working overtime trying to sort them out. It was one of those days that makes one want to quit right now. I am even contemplating giving up with working dogs so I know it was a rough day.

The sheep were not willing to move up to the race at all. It was the same set up we used last week with pretty good success but this time proved how every time is a very different scenario to the animals.

Jade and Cajun were holding the back of the flock and seemed to be losing ground. I kept going back to encourage and help but this was just not going well. We were about 3/4 of the way through the sort when the remaining animals piled together, heads to the center. The dogs circled several times, not sure what to do. This encouraged the sheep to pile even tighter. We tried in vain to peel animals from the edge of the group and get them to go somewhere, anywhere.

Allen and I decided to pull panels together and make a tighter pen, holding the animals close to the race entrance. The dogs were inside the tight pen and this was my big mistake. That packed group of sheep didn’t have a lot of room to move but they had enough. They moved like a giant cotton ball, even going over top of the dogs. Cajun managed to stay up and out of the way but Jayde was caught underneath or maybe she went there voluntarily to avoid getting crushed against the panels, I’m not sure. She sure looked relieved when I ran around to rescue her.

In the next instant of insanity a few ewes broke and blasted down the race, Cajun in such hot, angry pursuit he got in between and was rolled in the race. It was ugly.

A smarter person may have pulled the dogs out at that point but I didn’t. Me and those two dogs kept trying and trying to make sheep move. I wished desperately to give those two dogs some success, but I couldn’t make it happen. The sheep won.

Jayde kept on working, although tentatively but Cajun lost his confidence and push. His confidence was iffy previous to this so it was heartbreaking to seem him fall apart because I put him in a tough work situation. The dogs had been slowly losing the battle since we started and it culminated in a bad no-win situation. Jayde later proved she still had guts aplenty when we had to move ewes who were determined to stay on the fence line calling to their lambs. She made them all leave and march back out to pasture. But it seems it will be a long, uphill climb for young Cajun.

My imagination is grand and does not slow down to filter positive from negative imaginings. In one instant of an afternoon I had a traffic jam of never ending ill-fated thoughts scrambling around in my head.

What if this dog doesn’t have what it takes? Is my dog ruined?
I can’t let anybody know he can’t move his sheep; that he’s afraid to now.
Is it just a bad day and for this one time the sheep beat us?
I can’t get rid of Cajun, but I can’t keep a dog that won’t work, so what on earth will I do?
Have we gone overboard? Can I get his confidence back? How do I do that?
I totally misread this dog. I’ve put too much obedience over his instinct. Will his instinct come back?
He used to be so forceful I thought I might not handle him? How did I manage to squash that?
What happened? Where did it go wrong?

I desperately need to get my confidence and my working dog back.
Labels: border collies kelpies stock dogs