Whew, What A Day 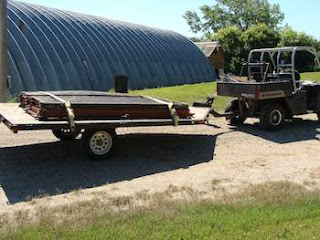 Whew yesterday was quite the day. I was too tired to write a post last night though. In fact I was so tired I left Jayde outside overnight.

We loaded panels on the trailer and headed to the pasture. We were moving sheep to the next paddock so we took advantage of the move by sorting off lambs and ewe lambs. We needed to check the docked tails and castrations on the lambs and the yearlings are needed for an upcoming sheep camp and trial.

It sounds like such an innocent job but it was four hours of sheep work. First collecting them off pasture. Then convincing them to move through the race and sorting them, then catching each lamb to check docked tails and castrations, and finally moving the sorted yearling ewe lambs home. In hindsight, now that the lambs are older, it might have been an easier task to walk the flock home and back again. It's a toss up.

Jayde and Cajun were responsible for holding the flock to us at the corner (bottom left area of the photo) as we did not have a pen large enough to hold several hundred sheep plus lambs. Maintaining a flow for the sort was difficult because we were using such a short race (again limited panels). The dogs worked very hard at containing lambs and only once did some of the group of ewes slip back on them. It was hot and it was very tiring work for them and they amazed me with their effort. 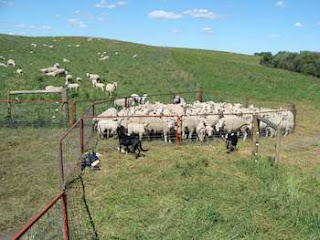 In this photo, all sheep are sorted (ewes in new paddock at top left) and we’re just catching the last lambs still in the pen with the yearlings. After I took the photo Cajun and Jayde were tied up in the shade to rest.