So my moment with Cajun yesterday wasn’t just a fluke.

Cajun and I were back on pasture this morning and the wall of sheep approached once again as I made my way out of the gate. I let Cajun slip through the fence and he marched forward without waiting for any direction from me.

He did a couple flanks on his own plus a couple I asked him for.  A few short driving stretches and we edged the ewes back over the hill. We didn’t encounter the cows this morning so it ended there. It was another sweet moment of working this dog. We’re starting to gel.

One thing that amazes me about this dog that I don’t experience with Jayde, is his propensity to understand the job. Just show him a time or two and he’ll be ready for it the next time.

With morning chores complete and dogs exercised and worked, I headed off to a nearby sheep show and sale. Nearby meaning within the hour.

I returned mid afternoon knowing that it was time to give the ewes what they wanted and move them to another paddock. This means I won’t have another wall of sheep to practice driving on again :(

I took Jayde and Cajun along for the move. Cajun was my pick for working a ewe with her lamb who were in an area they shouldn’t be. She gave us trouble when she headed into thick brush. We had a heck of a time fishing her out of there. Cajun kept blocking her escape thinking she was getting away every time. Once we did get her in the open again Cajun did some distance work to cut her off and bring her back to the flock. It wasn’t his best work but both of us were worked up at that point. And hey, the job got done.

Jayde was my pick for gathering the flock together and I let Cajun join her toward the end. When we had the flock headed to the right end of the paddock we pulled off and returned to the Ranger.

After that a couple calls by me was all I needed to persuade the ewes to follow the Ranger. I opened the gate and the dogs and I watched them pour through. 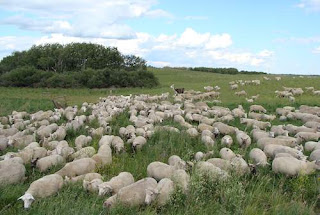 When I move the flock by calling there are always lambs that dilly dally and get left behind.  It took us about 15 minutes to get the flock moved and then another half hour to move the 20 odd remaining lambs.

Young lambs are hard to work. They tend to go every direction at once so it’s tough for the dogs to know who to cover first. It seemed like overkill but I let both Jayde and Cajun work this bunch of lambs. It was interesting to watch them sort it out. Both dogs showed some great work. Jayde tends to rely on speed a lot though and in the end it was Cajun who figured out how to handle the lambs by giving them some distance and showing a great deal of patience which is not usually like him.

Of course I have no pictures of the dogs at work. I missed a great shot of both dogs standing together in the bathtub water trough behind the water bus, after working those lambs. Camera was sitting on the Ranger. Nonetheless I can assure you it was a grand day of sheep, dogs and ranch work.