Lucas and Lady have quickly settled in with a small band of ewe lambs. The next step is taking them out to the pasture which is where we really need them. Here they will meet the two other adult guardian dogs who they will work with, if all goes well.

It is evident that these two are well bonded to sheep which has made the integration to our place so much smoother. We're pretty sure the introduction to the pasture flock will be fine. However, a pasture situation is a lot different then a well fenced paddock near the yard and the success also depends on how Oakley and Glory accept the newcomers. Glory is not always so accepting. 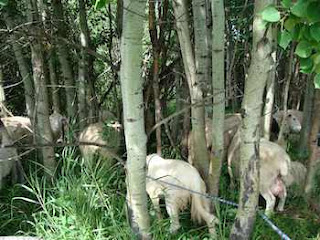 We used the same approach we took earlier. We transported Lucas and Lady to pasture in crates. Once there we hooked them to a long lead and let them go where they liked. Lady sought the sheep right away however now there were so many she didn't know where to stop. Lucas seemed stuck and stood in one spot unless we encouraged him to walk.

When Oakley and Glory approached we remained neutral. We knew Glory was the one to watch. There was casual greeting and each dog went on his/her way. No one was interested in more. A half hour later we unhooked the leads on Lucas and Lady. Allen and I separated and each took watch of a dog. 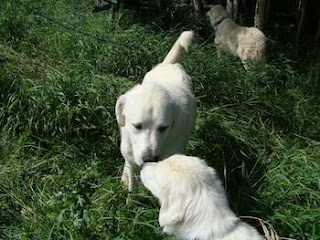 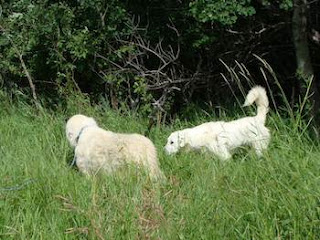 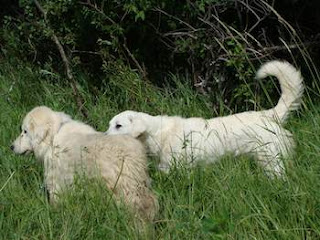 Both dogs traveled staying within the area of the sheep. Lucas was the first to find a shady spot next to resting sheep and lie down. Lady continued to travel. Numerous sheep were resting in the shade along a large bush area. Lady circled this and traveled around on the far side of it. Finally she came into the bush and into the group of ewes. She settled well toward the back.

We decided to leave the dogs on pasture rather than move them back and forth. We returned to check on them a few times that day. Everyone seemed very well settled and we decided to risk leaving them there for the night as well.

It was a great relief to enter the pasture the next morning and see four dogs were still there.